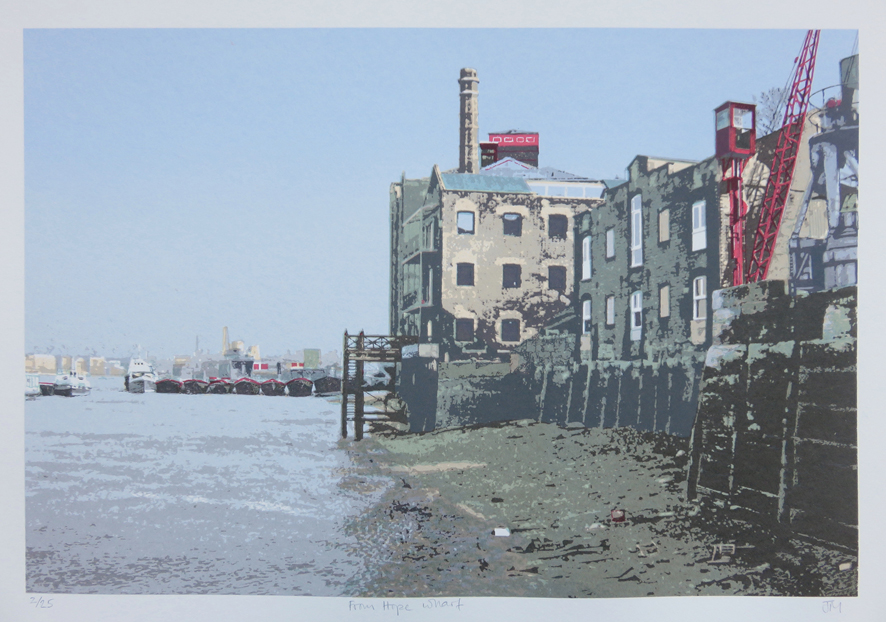 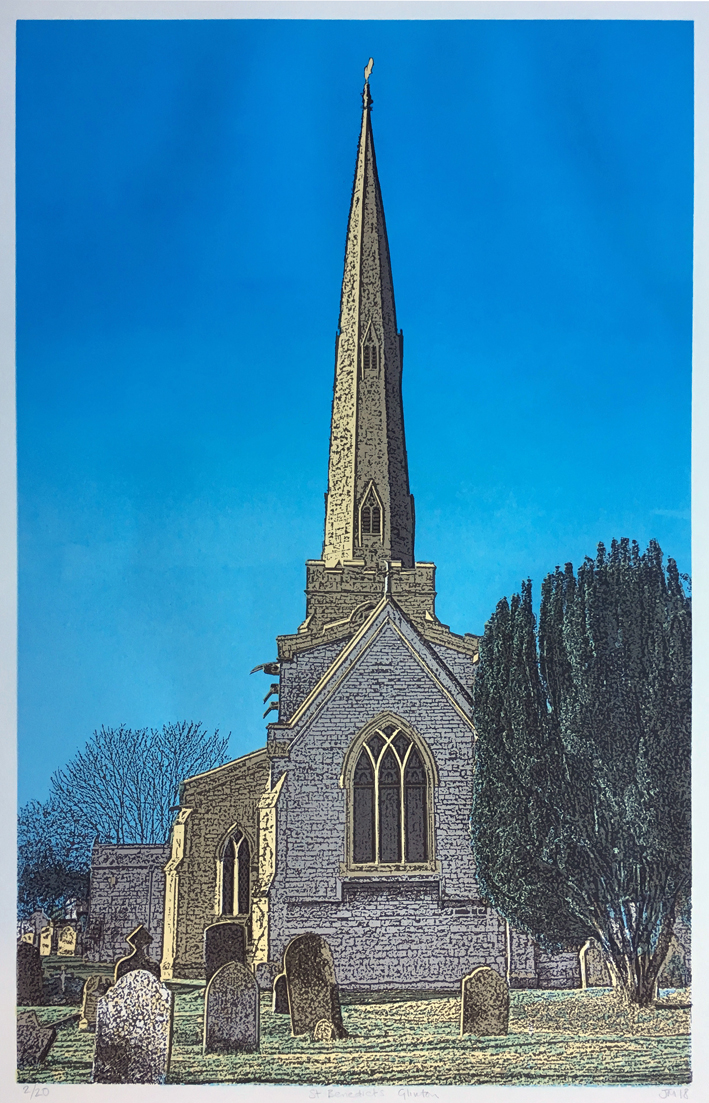 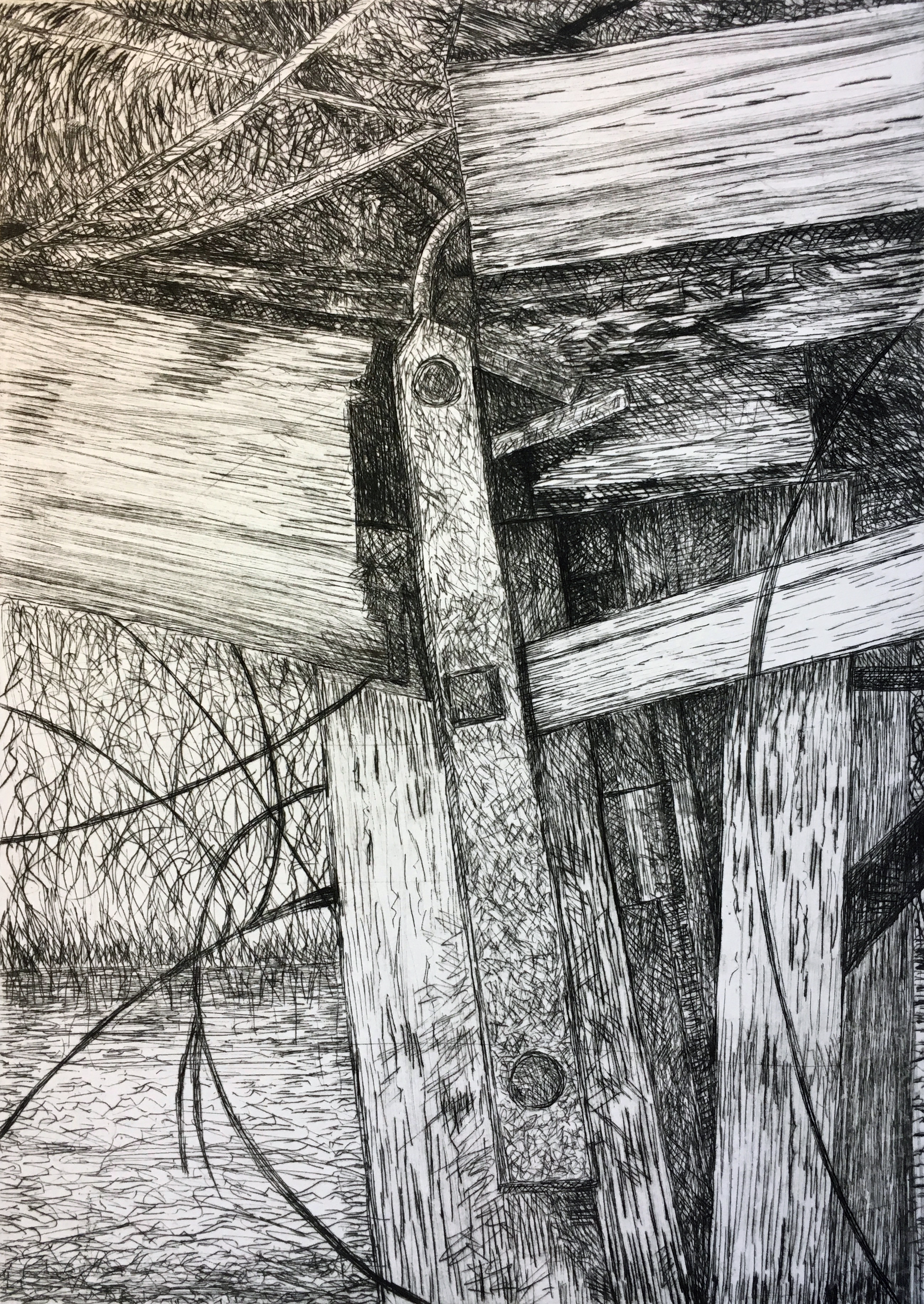 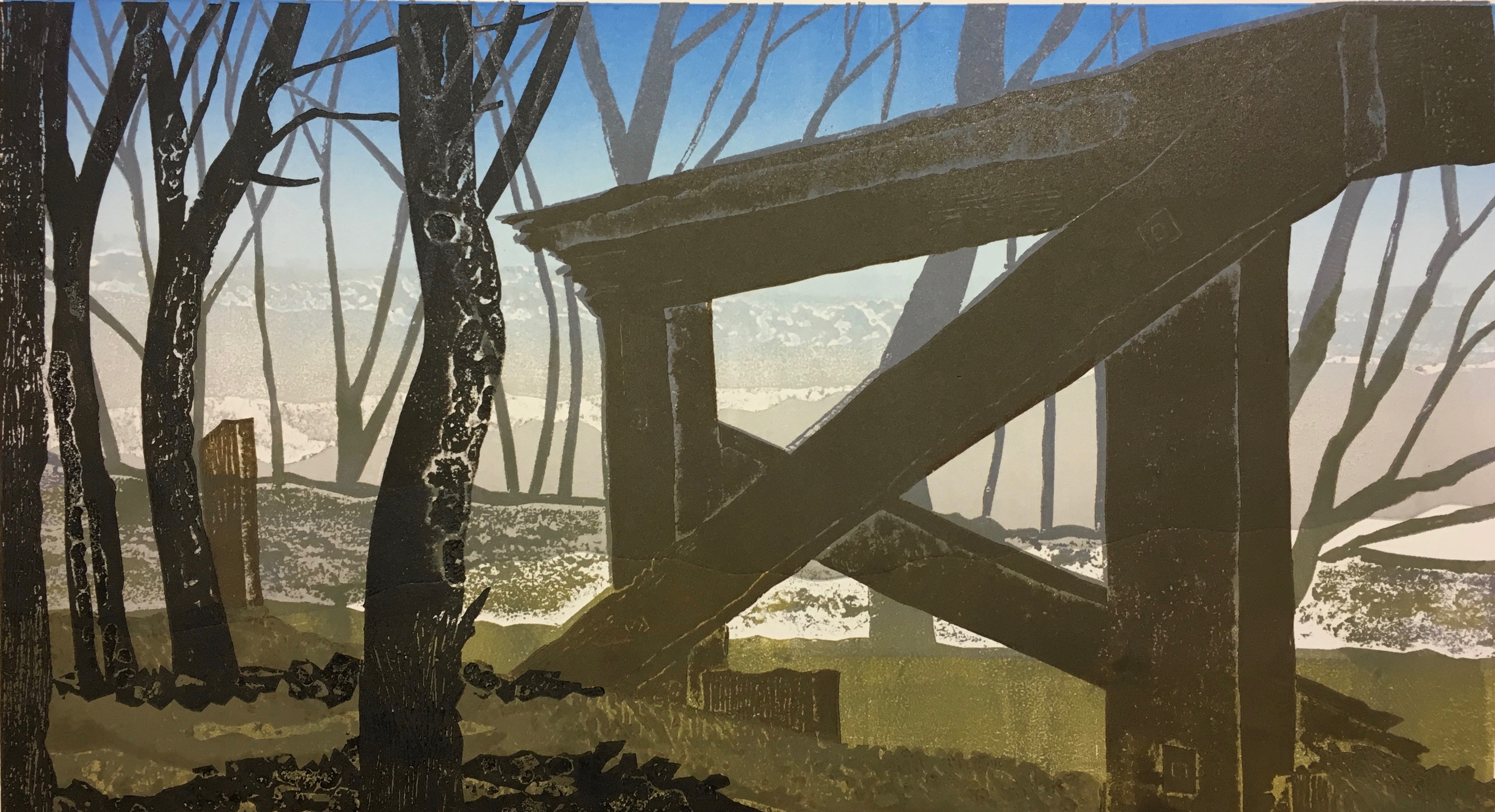 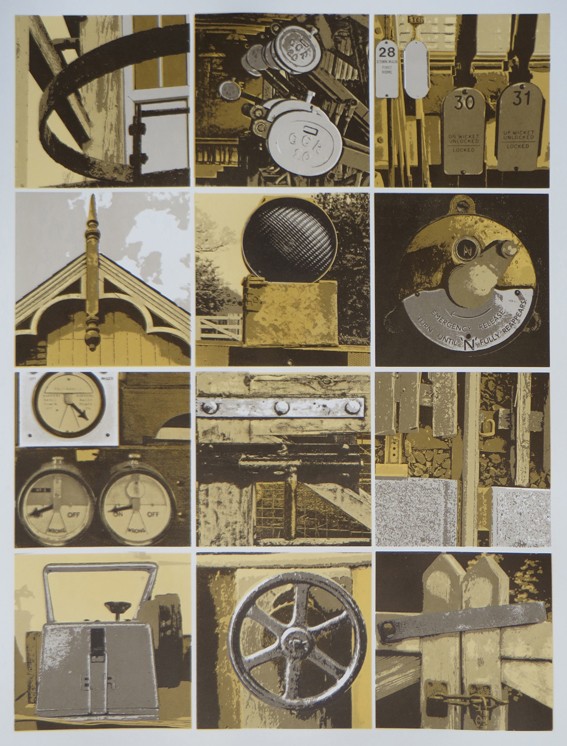 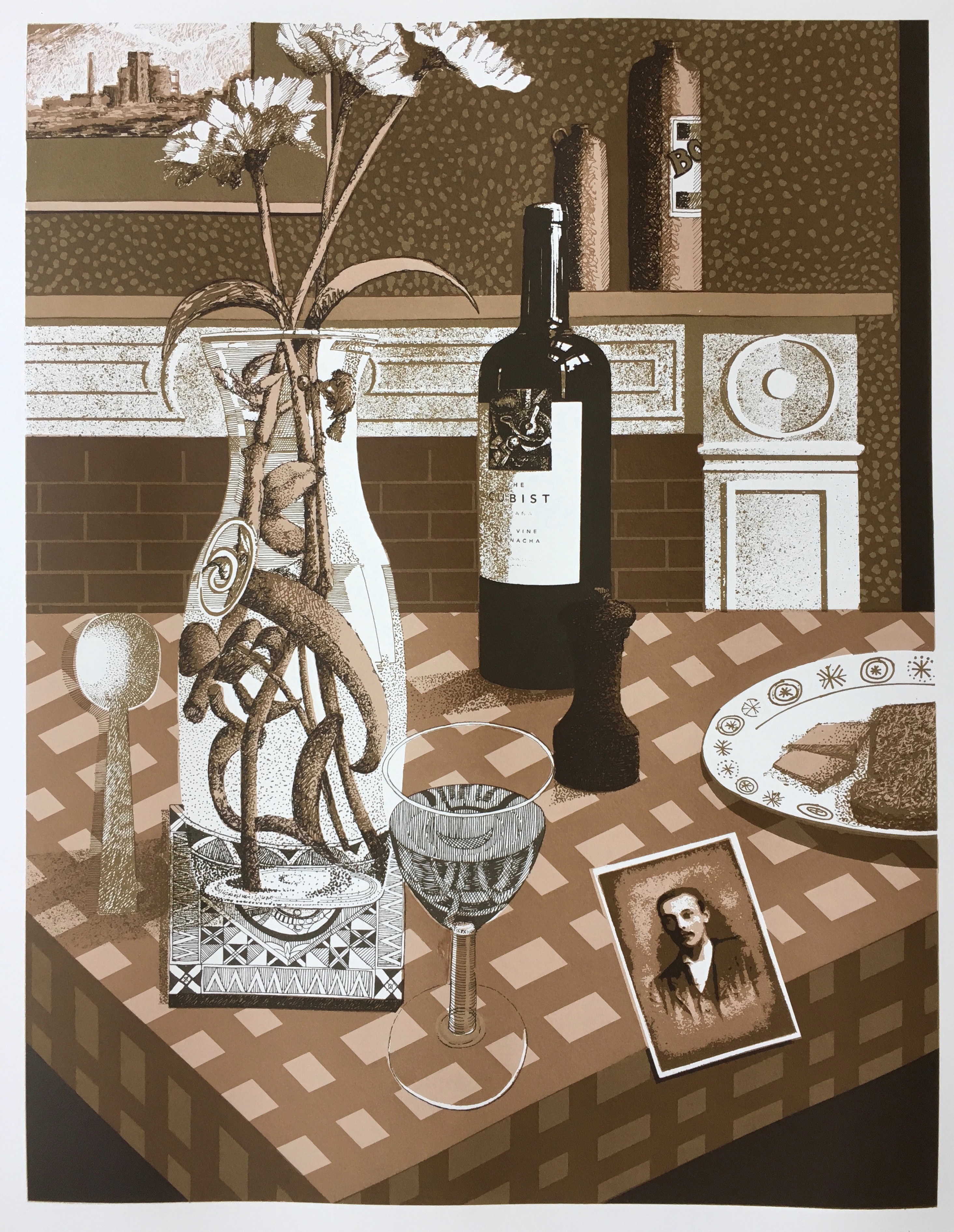 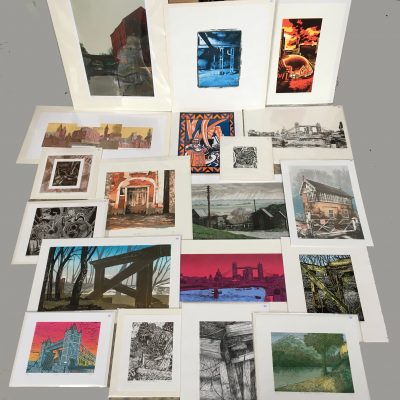 You will be able to visit a working Printmaker’s Studio: Exhibitions, Demonstrations, Explanations,Workshops (Sunday Mornings). My prints feature Landscape, Still Life, Railways, Canals, Industrial remains. London, Local and European. Explore the mysteries of Printmaking. When we re-open in 2021 (hopefully). 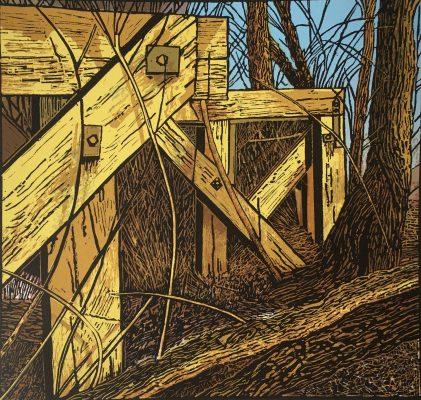 Number 7 of the Houghton Trestles Series

based on the trestles that supported a Victorian railway  bridge 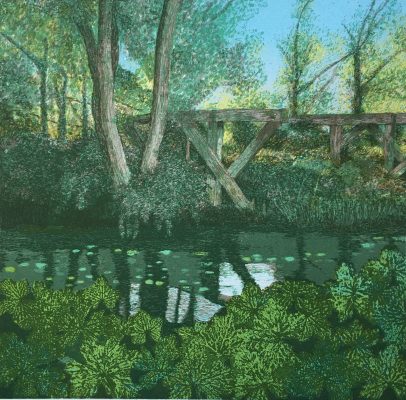 Number 8 of the Houghton Trestles series 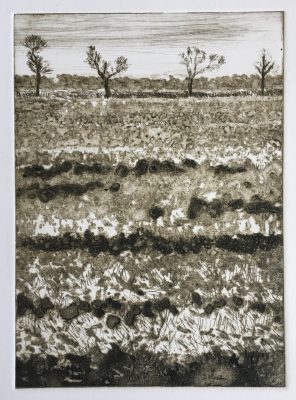 Take a Lockdown Walk with me 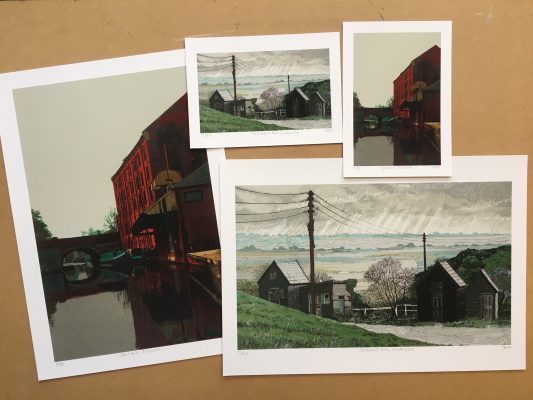 John is one of the few artists in the Peterborough area who works exclusively in printmaking. A lot of the work s are made using screen printing but recently the acquisition of a small etching press has led to works made in Lino, card and drypoint.

His Prints are designed and produced in his own print studio in Northborough. One print can take up to two months to produce, as he goes through an extensive process of proofing before starting to print an edition.  Editions are rarely more than 25 and are printed with acrylic based inks on high quality mould-made papers. They are available framed or unframed. 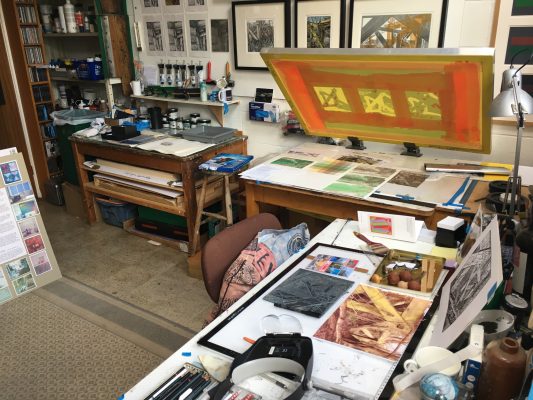 John has been making original prints for over 50 years. His printmaking practice developed radically in 1979/80 when he began a series based on images of the Northampton Arm of the Grand Union Canal. Prints are now produced in small editions in his own studio in Northborough.

He is mainly known for his screenprints of the British Industrial heritage: Dockside warehouses (now in the Museum of London’s collection), Signal Boxes and a recent Paper Mill Suite. He still continues to experiment with print techniques and subject matter, particularly through a 25 year long “cubist” series.

John taught Art in Northampton, Peterborough and Oundle. He has recently exhibited in Stamford, Northampton and has  recently had large scale exhibition of his prints in Alfred East Gallery, Kettering. 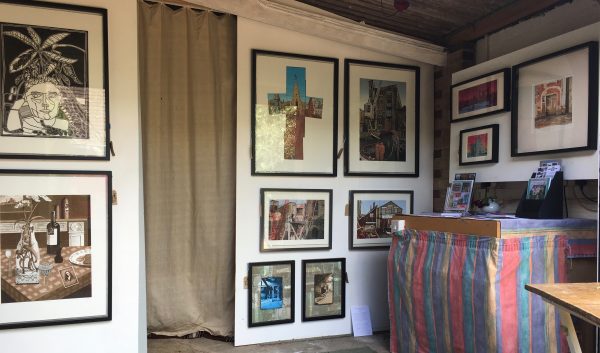 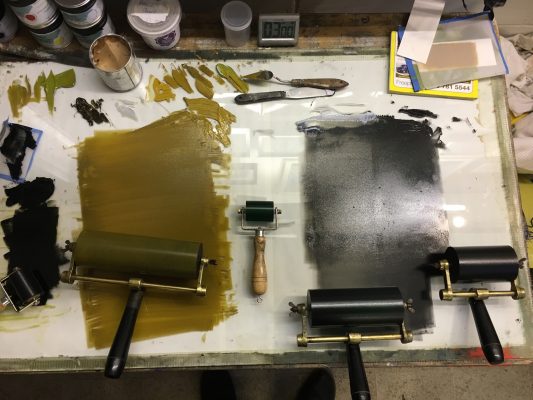 Where can see the work now?

You can see his work at:

*Original Prints – An original print is a work of art created by hand and printed by hand, by the artist, from a plate, block, stone, or stencil that has been hand created by the artist for the sole purpose of producing the desired image. The plates or stencils it is printed from bear no resemblance to the finished work of art, which means it is not a copy or a reproduction of anything.  Each print produced is technically a unique work although produced as a signed and numbered multiple.  The original print is usually produced as a limited number of impressions, another word for print. The term for this group of prints is the edition. Although there are many of the same image in an edition, each print is an individual part of the whole, the whole being the edition. An original print is actually one piece of a multiple original work of art. (Bill Wheeler)

Images on the PAOS.org.uk website are the copyright property of the artists or groups named. Please contact the artists using the details they have listed here for more information or to obtain permissions for use.

Open other times by appointment
Yes 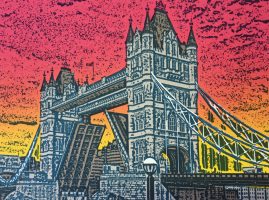 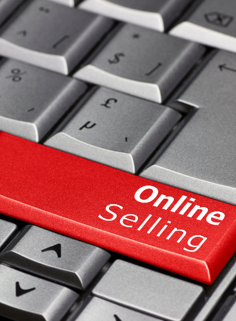 PAOS, in partnership with City College Peterborough, have arranged for a FREE online course to help members learn more about More

Zoom Meetings and Videos for PAOS 2021

As 2021 shapes up following the new lockdown in January and the ever evolving vaccination program, PAOS is seeking to More

RA taking bookings for ‘The Arrival of Spring’

Tickets now available for ‘David Hockney: The Arrival of Spring’ In the midst of the pandemic, David Hockney RA captured More

City Culture Peterborough is delighted to announce the reopening of Peterborough Museum and Art Gallery on Friday 4th December. The More