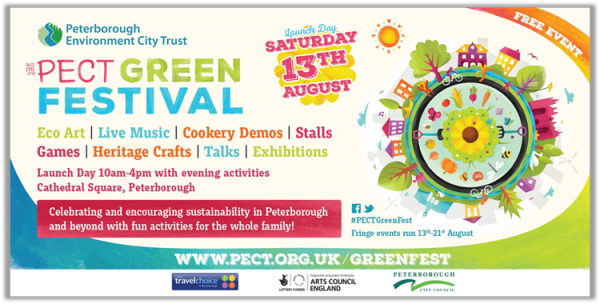 The artist line-up for the 2016 PECT Green Festival has been announced.

Seven artists have been commissioned to transform Peterborough city centre into a showcase for environmental art at this year’s PECT Green Festival, which returns with a Launch Day on Saturday 13th August and Fringe Events through till 21st August.

From a three-metre long papier-mâché stag beetle to an origami boat walking trail, the artworks promise to spark debate about sustainable living and encourage residents to take positive action for the local and global environment.

Organised by the charity Peterborough Environment City Trust (PECT), the Festival brings together community groups, charities and businesses in an annual celebration of ‘green’ initiatives in the city. The Festival aims to encourage local people to live sustainably and develop long term behaviour change, by exploring themes such as sustainable transport, recycling, local and sustainable food and biodiversity.

PECT is delighted to have been awarded £73,500 of Arts Council England funding to support the Green Festival over the next three years. Thanks to this funding, artists will be able to exhibit their works and run interactive activities at the 2016 event. Festival sponsor Travelchoice has also commissioned a further artist to highlight sustainable transport issues.

Rebecca Presland, Sustainable Travel Officer at Peterborough City Council, said: “We are very excited to announce that this year we have commissioned an artist to produce a piece of artwork, aimed at encouraging the citizens of Peterborough to consider their travel choices and the wider impact that their choices have on the health of themselves and their environment. After deliberation, environmental artist Jacqui Jones was chosen to produce a piece of work that we feel will really capture the public’s imagination and we are really looking forward to seeing the finished piece.”

Local artists Phillippa Phillips and Vikki Harold will come together to create an interactive, recycled artwork at the Festival launch, as well as recycled flower and seed bomb workshops. Using reclaimed materials, Vikki will create ‘Bee & Bee’ – an urban, bee-friendly environment to show how we can all help pollinators. Phillippa will explore attitudes to waste and litter by working with local Rainbow, Brownie and Guide groups to create a meadow of flowers made from collected rubbish.

It’s Not Your Fault – Jay Gearing

Co-founder of Paper Rhino – an ethical design co-operative – and a trustee of Peterborough’s community garden The Green Backyard, Jay Gearing will be tackling the link between consumerism and climate change in his Green Festival installations. Visit the city centre during the Festival week to see his art.

Funded by Travelchoice to explore sustainable transport issues, multi-media artist Jacqui Jones will install a series of origami-style boats along the River Nene to highlight the impact that rising sea levels would have on the region. The installations will also form a trail to be followed on foot, bike or boat. Jacqui explains: “Having art in galleries is wonderful but I also strongly believe there is an argument for placing art in a situation where the general public can interact with it… I aim to produce work that informs, inspires and instigates creative discussions.”

Artist Douglas Thompson is returning to his home town to create six artworks inspired by trees found in the city centre. A giant paper-cut collage of oaks, beech and willow will be brought to life by story-telling tree spirit performers, while the public will be able to add a leaf to the ‘tree of promises’. Thompson is passionate about both Peterborough and the natural world, saying: “We need to re-amaze and reacquaint ourselves with nature – especially since we are very much in danger of losing so much of it.”

Natural history is a dominant theme in Janet Bates’ work, and her planned Green Festival sculpture is no exception. The artist will create a three metre-long sculpture of the endangered male stag beetle using recycled materials and papier-mâché. The sculpture aims to illustrate the enormous loss if the stag beetle were to become extinct. Visitors to the sculpture will find a surprise inside…

Combining live theatre, poetry and sculpture, James Tovey’s immersive stage set will explore the possibility of a future Peterborough submerged under water. The work will draw on the artist’s personal interest in environmental issues, land art and especially boats – Tovey runs a company specializing in traditional boatbuilding. Especially commissioned pieces have been written by playwrights and poets from the city and beyond, with actors employed to perform six short plays on the day, the whole concept piece is presented in conjunction with Eastern Angles Theatre Company. There will also feature an insallation by Luke Payn as well as artwork by cartoonist and artist John Elson incorporated into the props and backdrop.