Russians and Americans at the RA

In seperate exhibitions, art from two of the 20th Cenuary’s great superpowers are explored at the Royal Academy during 2017

One hundred years on from the Russian Revolution, this powerful exhibition explores one of the most momentous periods in modern world history through the lens of its groundbreaking art.

Renowned artists including Kandinsky, Malevich, Chagall and Rodchenko were among those to live through the fateful events of 1917, which ended centuries of Tsarist rule and shook Russian society to its foundations.Amidst the tumult, the arts initially thrived as debates swirled over what form a new “people’s” art should take. But the optimism was not to last: by the end of 1932, Stalin’s brutal suppression had drawn the curtain down on creative freedom.Taking inspiration from a remarkable exhibition shown in Russia just before Stalin’s clampdown, we will mark the historic centenary by focusing on the 15-year period between 1917 and 1932 when possibilities seemed limitless and Russian art flourished across every medium.This far-ranging exhibition will – for the first time – survey the entire artistic landscape of post-Revolutionary Russia, encompassing Kandinsky’s boldly innovative compositions, the dynamic abstractions of Malevich and the Suprematists, and the emergence of Socialist Realism, which would come to define Communist art as the only style accepted by the regime.

America after the Fall: Painting in the 1930s 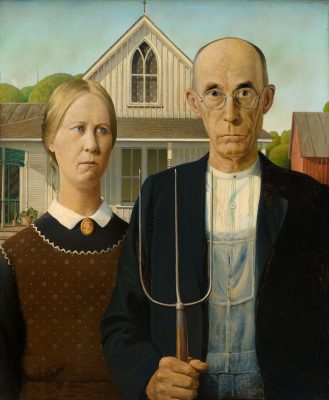 The art of 1930s America tells the story of a nation in flux. Artists responded to rapid social change and economic anxiety with some of the 20th century’s most powerful art – brought together now in this once-in-a-generation show.

These 45 truly iconic works paint an electrifying portrait of this transformative period. These are works which have rarely been seen together, by artists ranging from Jackson Pollock, Georgia O’Keeffe and Edward Hopper to Thomas Hart Benton, Philip Guston and more. Perhaps the most celebrated work of them all, Grant Wood’s iconic American Gothic (1930), has never left North American shores before.In the devastating wake of the Wall Street Crash, artists sought to capture the changes in urbanisation, industrialisation and immigration that pulsed across the country, resulting in one of the most vital periods for American artists in the 20th century. This was a decade like no other that saw them search for an elusive ‘Americanness’ through realism, populism and abstraction, rural and urban themes, the farm, the new, the traditional.As Franklin D. Roosevelt said: “Art is not a treasure in the past or an importation from another land, but part of the present life of all living and creating peoples.” So experience the life of 1930s America through the many masterpieces in this landmark show.Exhibition organised by the Art Institute of Chicago in collaboration with the Royal Academy of Arts, London, and Établissement public du musée d‘Orsay et du musée de l‘Orangerie, Paris
The Royal Academy of Arts is an art institution based in Burlington House on Piccadilly in London. It has a unique position as an independent, privately funded institution led by eminent artists and … Wikipedia
Address: Burlington House, Piccadilly, Mayfair, London W1J 0BD
News